The popular saying goes that “breakfast is the most important meal of the day” but most Western breakfasts, such as cereals and toast, simply aren’t providing our bodies with the nutrients we need to kickstart our day.

In true Paleo form, I believe that a protein-rich start to the day is important. Providing your body with protein instantly fuels your body naturally for what lies ahead.

For years my boyfriend and I have been a fan of traditional bacon and egg breakfasts, but, after having lived in Hawai’i, we were inspired by the island style Loco Moco and thought that we would get a little more creative.

Following the arrival of our most recent Corner Post Meats order, we began adding grass-fed sausage to our daily breakfast routine and, after a little experimenting, my boyfriend mastered “The Breakfast Burger!” Here is his ultra-Paleo (and perhaps somewhat manly) recipe:

Preheat the oven to 425 degrees F.
Place the bacon on a foil lined baking sheet and bake for 10 to 12 minutes.
Place the breakfast sausage meat and spices in a small bowl and mix together before forming a patty.
In a small sauté pan, melt 1 teaspoon of coconut oil over medium heat.
Add the seasoned sausage patty and cook until your desired preparation is reached.
Meanwhile, in a second small sauté pan, melt the other teaspoon of coconut oil over medium heat and add the egg, cooking it sunny side up.
Once all three parts of The Breakfast Burger are cooked, stack them on a serving plate: sausage patty at the bottom, bacon in the middle and the egg on top.

You might remember me mentioning before that I was looking for some type of nut sauce to pair with spring rolls, that’s where the post on Cashew Butter came from. The prefered sauce normally is a peanut sauce, however that’s not Paleo so I needed to get a little creative. The following recipe is a great example of how you can take a recipe you already know and with a slight change you have something completely different!

It’ so simple! This goes to show you that you don’t have to spend a ton of time to come up with something new. Get a little creative this week and try spicing up the recipes you already know how to make. You’ll be amazed at your wonderful creations!

A Note from Camilla & Melissa:

Tarah Chieffi brings a great deal of knowledge and personal experience to the Paleo community which we so greatly admire. As the Founder of one of our favorite Paleo Blogs, What I Gather, and the Author of the latest Paleo Pregnancy book, The Everything Paleo Pregnancy Book (which we are so excited to have just received in our mailbox!), Tarah shares Paleo resources and recipes with thousands of fellow Paleo fans and we are so honored that she wrote this Guest Post exclusively for The Paleo Pact.

Selecting The Best Foods For Your Paleo Pregnancy

If you are familiar with the Paleo Pact girls and their book, PALEO Cleanse, then you are well aware of the benefits of eating a nutrient-dense Paleo diet. Eating real food and cutting out all of the “fake” food is what brought me to love Paleo in the first place; I knew that everything I was eating was full of nutrients and contributing to my overall health. You certainly can’t say that about an extra value meal from the fast food drive thru!

During pregnancy, though, there are certain nutrients that become even more important because of the roles they play in your baby’s growth and development. These include folate, calcium, vitamin A, protein, and omega-3 fatty acids, among others. Following is a list of my favorite pregnancy superfoods and some tasty ways to work them into your diet.

If you are ready to learn more about how a Paleo diet can help you meet your nutritional needs during pregnancy, check out my new book, The Everything Paleo Pregnancy Book. With exercise recommendations, breastfeeding support and advice for recovering from childbirth and adjusting to motherhood, The Everything Paleo Pregnancy Book is the guide a mom-to-be needs to navigate a Paleo lifestyle during pregnancy. To top it all off, I’ve included over 100 recipes and a four week meal plan to set you on the path for a happy, healthy pregnancy. You can order the paperback and Kindle versions now on Amazon or find it at Barnes and Noble in stores or online. 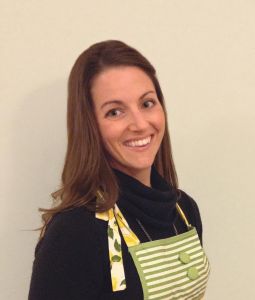 Tarah Chieffi is an author, freelance writer, blogger at What I Gather and holistic nutrition educator in the Louisville/Southern Indiana area. Tarah’s passion is working with pregnant women, new moms and families to achieve health and happiness through physical fitness and a “real food” lifestyle.

ORDER YOUR COPY OF THE EVERYTHING PALEO PREGNANCY BOOK

Heat a medium nonstick skillet over medium heat. Once hot, add ghee or coconut oil to pan.
Crack eggs into a medium bowl. Add water, salt, and pepper. Whisk well.
Pour eggs into pan. When eggs begin to set around the edges, use a spatula to push cooked eggs toward the center of the pan, and tilt skillet so the uncooked eggs can spread to the bottom of the skillet.
When eggs are almost set, sprinkle spinach, cherry tomatoes, and green onion evenly over half of the omelet.
Use a spatula to fold the omelet in half. Cook for 2 minutes, until eggs are fully cooked.
Serve with sliced avocado.

I came up with this lovely concoction when I was attempting to make a peanut style sauce for spring rolls. It requires an extra step or two more than what is normal for our recipes but it’s well worth it. This is a delicious cashew butter that you can use on almost anything, even if you just pair it with an apple.

In a food processor blend cashews until you have little granules.
Bring a medium sauce pan to low heat, combine coconut oil, vinegar, honey and salt.
Add processed cashews to liquid mixture and stir until well combined.
If you would like a smoother consistency pour back into processor and blend until you reach desired consistency.

This cashew butter recipe is simple to make. It has a sweet taste and can be used as a topping for several of the baked good recipes we feature. It can also be paired with fruit to provide a filling snack.

I remember thinking how fancy stuffed chicken breasts looked in the grocery store delicatessen growing up, only to discover how easy they really are to make at home.

Paired with bacon and spinach, a simple piece of chicken becomes a decadent dinner, that plates beautifully and doesn’t take long to prepare. The bacon grease flavors and tenderizes the chicken, leaving little need for additional spices or sauce.

This recipe serves one: 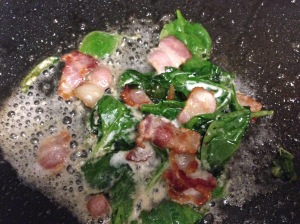 Slice open the chicken breast.
Place the bacon-spinach mixture inside the breast and then place the stuffed chicken breast back in the bacon greased sauté pan, cover and grill for about 10 minutes, flipping midway, until the chicken is thoroughly cooked. 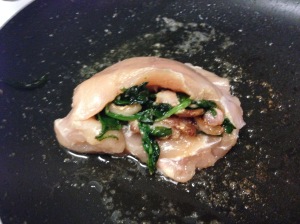 Enjoy the refined tastes of this simple, yet elegant dish,

You may have heard the term “Eat The Rainbow” recently. It’s picking up steam in a big way throughout the health industry. It’s meaning is pretty simple, you’re supposed to eat as many colored foods as possible during each meal.

Don’t get worried! I know that looks like a ton of food. The point isn’t to overeat, or to eat too much in the attempt to consume all the colors of the rainbow. The point is that you try to incorporate as many colors as possible into your meals. You also want to change up the types of foods that are a specific color. For example, you wouldn’t always want to eat sweet potatoes to get your “orange” in, you could try carrots or an actual orange.

The reason “Eating The Rainbow” has become popular is because nutrient (i.e. minerals and vitamins) composition and levels can lead to foods being a particular color. Foods that are a strong color are said to have more of particular nutrients. So the theory behind “Eating The Rainbow” is that if you eat various colored foods, you’ll gain a more diverse group of nutrients in your diet.

Here’s to “Eating The Rainbow”!

The soy phenomenon came in a whirlwind, died out due to mass-fear and has resurfaced again in recent years with the rise of the vegan movement. It’s a hot topic of concern in the Paleo community and there’s good reason for that.

Let’s take a moment to put soy in the spotlight.

Soy is part of the legume family, a food group eliminated on the Paleo Diet because of the inability for our human digestive system to effectively digest and gain nutrients from the food.

Soy, like most seeds and other beans, were cleverly designed by mother-nature to propagate themselves. Thus, the bean is naturally coated with proteins that keep the bean intact, enabling it to pass through the body and grow into another bean-producing plant. Those proteins are, unfortunately, toxic to humans and result in intestinal irritation in the majority of our species. Internal irritation causes inflammation, triggered by the body having to attack itself to rid our cells of the unwanted food particles. This not only causes side effects such as bloating, cramping, headaches and sleepiness, it also distracts the body from its ability to stay youthful and from keeping disease at bay.

A Leading Cause of Deforestation

Soy, along with corn, has become feed for most animals farmed to butcher in the United States. It’s cheaper than grass lots and it fattens up the animals quickly because, just like us, they are not able to digest legumes properly. As a result of the demand for soy feed, companies like Monsanto are planting growing numbers of genetically modified soy fields, which is having an increasing effect on deforestation, along with the displacement of indigenous people and smaller farms worldwide. Take Brazil for example, home to the world’s largest rainforest with incredible species of fauna and flora, including superfoods like acai berries. Each year, more of the Brazilian rainforest is destroyed and, in it’s place, soy fields are planted (as shown in this post’s featured image). Brazil has become the second largest global supplier of soy, after the United States, and supplies large food chains, such as McDonalds. This change has also affected the amount of oxygen and carbon dioxide in the region and is subsequently affecting the people and Brazil’s climate.

With all of the above concerns in mind, the coconut–as a substitute for soy products–is becoming more and more popular. Coconut milk is a great substitute for soy milk and coconut aminos work well in replace of soy sauce. But, even more significant is how one’s body benefits from leaving soy behind and turning to the superfood, coconut, instead:

Coconut is rich in omega 3 fatty acids and fiber that is easily digestible, metabolizes quickly, provides a natural source of energy, supports heart and brain health and nourishes skin and hair.

The Paleo Pact
Blog at WordPress.com.